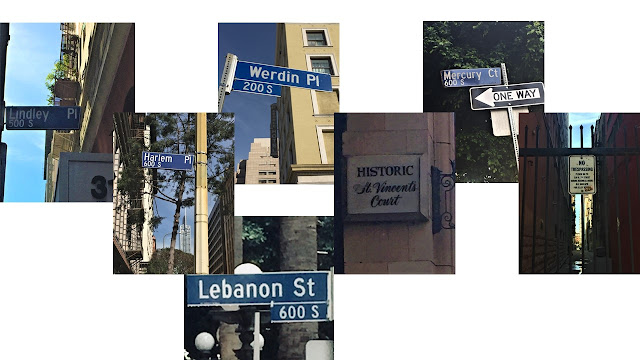 Downtown alleys generally do not pique much interest of passersby.  A field investigation of an area bound by 4th, Olive, 7th and Main Streets on May 5th resulted in a bounty of iPhone photos to share.

A handful of these service roads are up for discussion in this post - some were named for people; another named for some other place.  One alley can be traced back to its opening more than a century past, yet a name has never been assigned.  There is one that is better-known - a remnant from the time a college operated there.  Then there is the one that has the features of an alley but was named a "street" back in 1897.

The alleyways provided relief to drivers in a traffic-clogged downtown.  In 1925 a jewelry store salesman parked his car at 448 Frank Court to dash up to his office, but when he returned thieves had stolen $15,000 worth of gems from his vehicle.  In 1934 there were at least two parking bans - at Lindley Place near 6th and at Werdin Place near 3rd.


Here are definitions of some types of roads according to the L.A. County Department of Regional Planning:

Court:  a rectangular pocket off a public way; a dead-end street

Place:  a short street or court

Street:  a public way forty or more feet wide, used to give pedestrian and vehicular traffic access to various parcels of land making up a community.  A public way with a direction contrary to that of the avenues of a community.

Formerly called Angelus Court, it runs from 4th to 5th Streets (between Broadway & Spring Streets). It was re-named in 1917 for Herman Washington Frank, who served on the Board of Education from 1904-1915 and also the City Planning Commission from 1919-1923.  The Frank name is still familiar today along with his business partner Harris (the Harris & Frank Department Store).


Frank Court most likely provided a back entrance to their store located at 437-443 So. Spring Street. 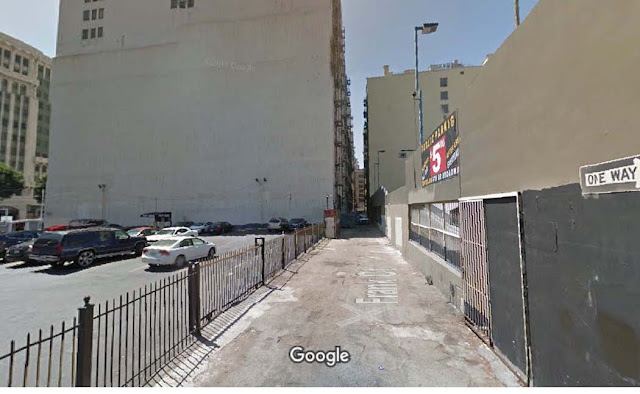 A street sign could not be found for Frank Court.  It is delineated on Google Maps however, shown on a faint overlay on the pavement in the image above taken when a building still existed on the right. 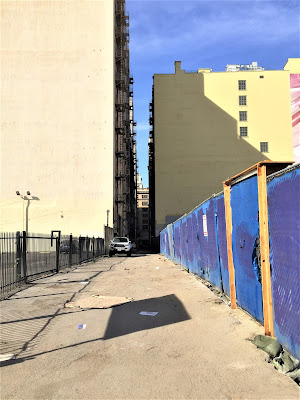 Above and below are recent photos from the morning of May 5th - looking south from 4th Street.  A structure at one time on the right was torn down and a deep hole there marks the rise of a future new building: 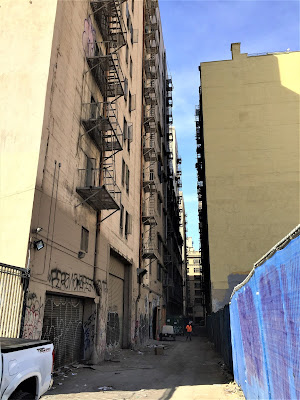 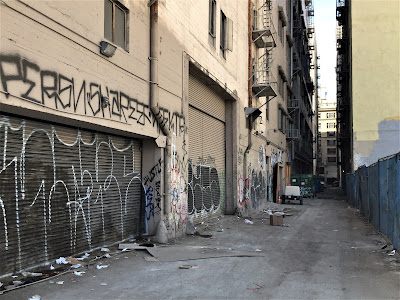 Above and below are north-facing views from 5th Street.  The metal fence has become commonplace for alleyway safety and aesthetics.  With the lack of consistent street signage - does this mean these alleys are no longer public thoroughfares?

Another road existed from 5th to 6th Streets (between Hill & Broadway) named in 1921 for Dr. Walter Lindley.  He lived long enough to see a place name designated for him, then he died the following year.


"Dr. Lindley's Private Hospital" was his medical practice from 1886 to about 1906 at 315 W. Sixth Street near the alley.  He established many firsts in the city - the Orphans' Home, the College of Medicine at USC, and many other accomplishments enough to fill up a decent size Wikipedia page.  He was also the founder of the Whittier State School - later known as the Fred C. Nelles Youth Correctional Facility slated to be torn down later this year. 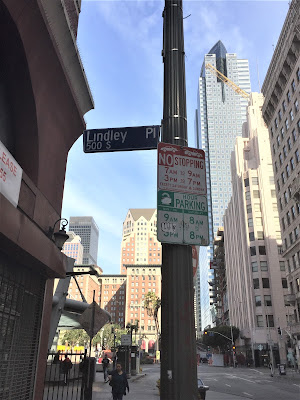 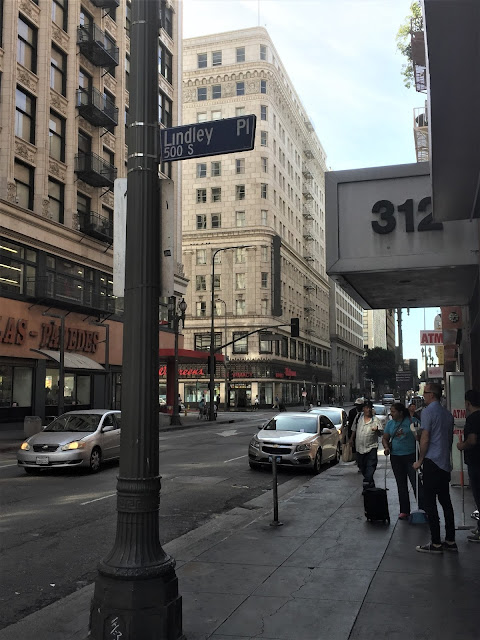 As seen on the 1921 Baist's map, Mercury Court appears as service road without a name, but one was given in 1965.

The entrance is on 7th Street (between Olive & Hill), but it does not reach all the way up to 6th Street.  The Los Angeles Athletic Club is probably one of the better known establishments serviced by the road. 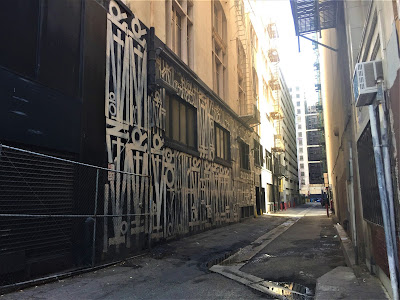 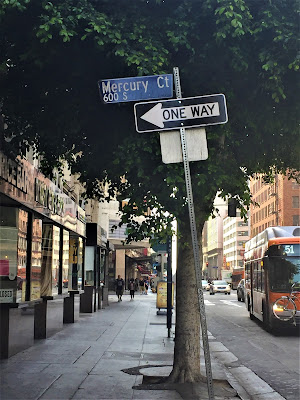 This was the site of St. Vincent's College's second location.  After the college moved down to Washington & Grand, Bullock's Department Store was established, and shoppers could step out of the Hill Street side of the store onto St. Vincent's Court and enter into the adjacent Bullock's building fronting Broadway. 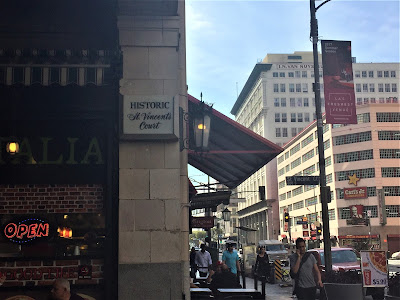 Above pictured along 7th Street (between Hill & Broadway) is a plaque to proclaim historic significance. 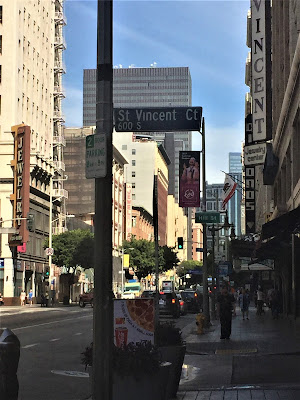 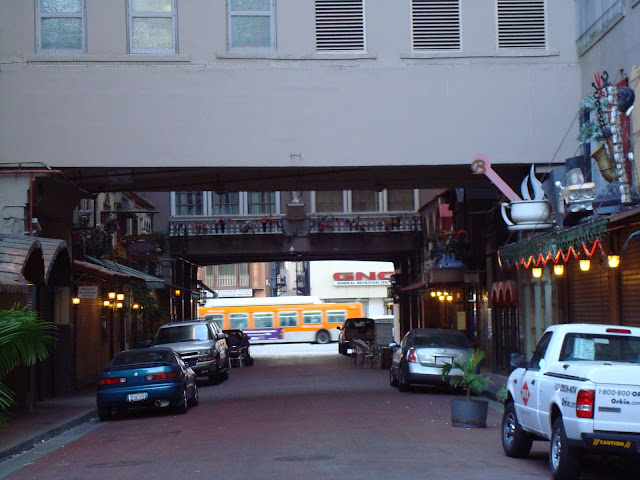 The image above was taken in 2010 and shows the fantastical open air yard of the Court.

This blogger was not able to find an explanation for this place name except that Harlem is a residential and business section of Manhattan, New York.

[Update 4/16/2019:  Well nearly one year has gone by and this blogger now believes the Harlem Place name, like in New York, harkens back to the city in the Netherlands, Haarlem.  Down below in this post is the mention of the Dutch bakery on this alley, Van de Kamp's.  Furthermore, close by was once a mega-store, 90,000 square feet worth, stocked with tents, awnings and sporting goods, the Wm. H. Hoegee Co., founded by a Dutchman.  The store took up two addresses, 138-142 Main Street & 139-141 Los Angeles Street.]

Formerly called Center Place, the road was eventually established (between Spring & Main) from 1st to 3rd Streets, and from 4th to 7th Streets.  But the road was re-named "Harlem" in 1917.  The segment of Harlem Place from 1st to 2nd Streets was vacated in 1957.

The segment of Harlem Place from 6th to 7th Streets (between Spring & Main) can be clarified - the Los Angeles Times reported in May, 1897 that the city received a petition from George H. Dunlop to establish an alley there.

The following photos track Harlem Place from 4th, then 5th, onto 6th, then at 7th Street a city street sign finally appears:

The "No Name" Alley

In June of 1897 the LA Times reported on a group of residents opposing the opening of an alley at 6th to 7th Streets between Broadway & Spring, so the City Council moved the matter to the July agenda.  Council minutes from March 29, 1898 seemed to indicate that the alley was approved.

Today the alley is still nameless. 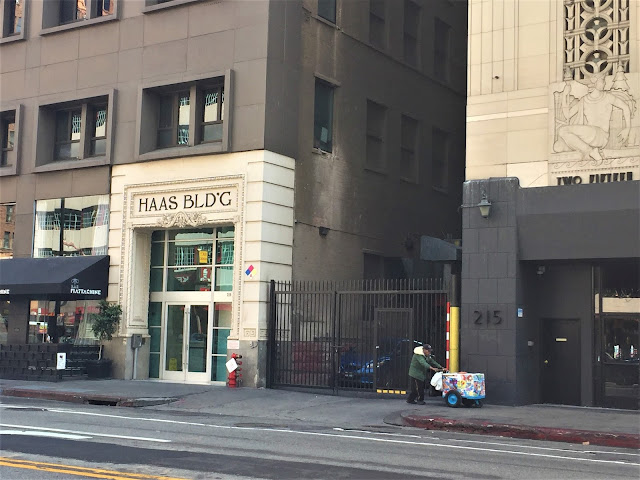 Below is a distant view of the No Name alley taken from Spring Street - the typical scene of the alley behind a parking lot separated by fencing: 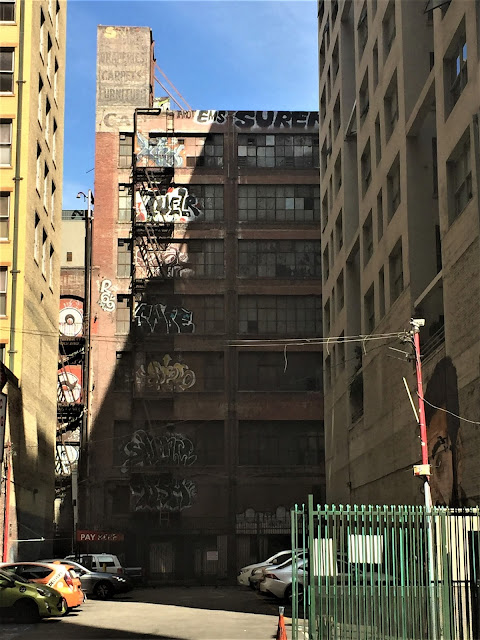 Probably the best-known of these little-known alleyways is Werdin Place.  Named for Ernest R. Werdin (1869-1932) from Minneapolis, Minnesota.


He served as the superintendent of streets from 1902-1904.  He then formed the Los Angeles Paving Company in 1912.  The business continued on through his son.  Portions of one well-known street paved by this company was Sunset Boulevard. 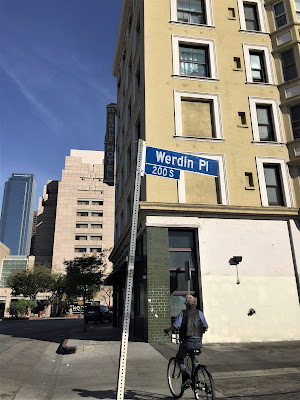 Once known as Werdin Alley, there is a sweet story in the 200 block.  There is a story at the 400 block.

The 200 block of Werdin played a part in the early years of Theodore Van de Kamp's Dutch Holland Bakers.  Born in Milwaukee, Wisconsin in 1891, he formed a partnership with L.L. Frank to open a store at 236 1/2 S. Spring Street in 1915 to manufacture Saratoga chips.  The following year they established a baking plant at 222 Center Place (later to become Harlem Place).  In 1917, wholesale and retail baking became their focus when they set up their plant at 255-257 Werdin Place.  A workplace accident occurred here in 1920 when an oven backfired and burned a baker.  Next door at 248 Werdin was the Globe Dairy Lunch Bakery.

Native Americans gravitated to 400 block of Werdin Place at the intersection of Winston Street in the 1960s.  In 1974 a safe house at 118 Winston Street was founded. 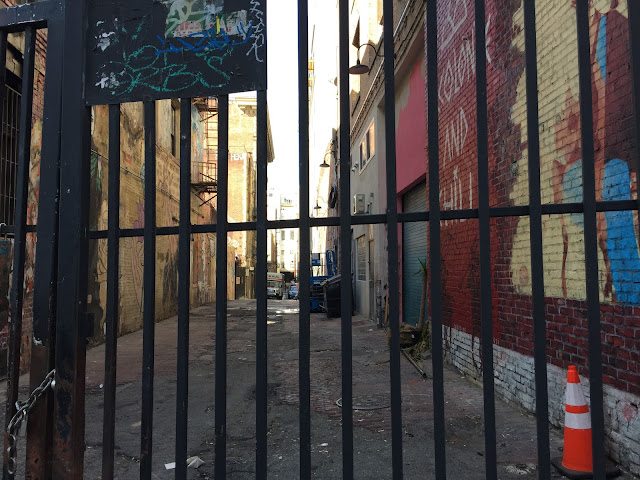 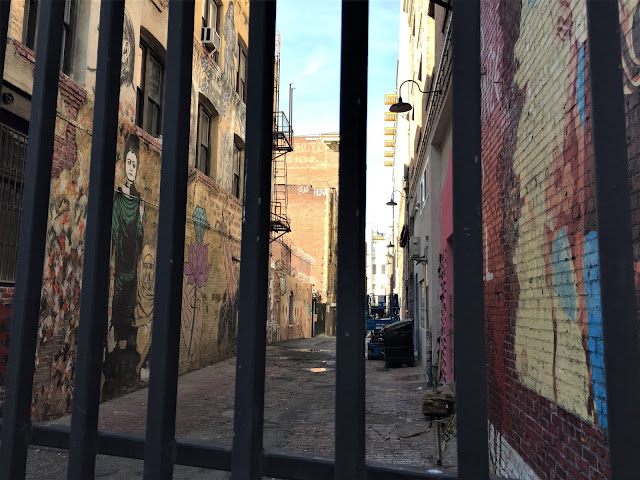 
This next batch of photos was taken on a rainy morning of March 2nd.

The little street that could - the Lebanon Street story is about a short and narrow alley that took on the status of "street" despite having the proportions of an alleyway.  The street designation may have prevented it from being swallowed up by downtown development in the 1920s, although the extension of Wilshire Boulevard took a bite in the early 1930s.

Residences sprung up in an alley called Park Lane from 6th to 7th Streets (between Figueroa and Flower), which in 1897 led the alley to be re-named "Lebanon Street".  Those living there paid to have the street paved with sidewalks put in (in March, 1898 the Los Angeles Times reported that the street was graded.)

At the start of year 1906, the city was met with protests by these proactive residents objecting to the installation of light poles.  Each pole sat on a two-foot base when the sidewalks were a mere five feet wide on each side of the street.

Within twenty years the neighborhood drastically changed.  The Times newspaper reported in January, 1923 that the "city's loneliest house is at 626 1/4 Lebanon Street, which is the shortest thoroughfare uptown and also the narrowest.  Across the street from it at an address which also runs in fourths some thrifty soul raises chickens within a stone's cast of the roaring Seventh street traffic."

A couple of years later a 99-year lease set the ball rolling for the opulent Fine Arts Building to constructed at Seventh and Lebanon.


Lebanon Street eventually extended south, running alongside the Figueroa Corridor in starts and stops down to Washington Boulevard.  Sometimes a street sign makes it known, or else there are no street signs on certain corners.

A segment of road from Cameron Lane to Venice Boulevard changed from Alexander Lane to Lebanon Street in 1917.

Lebanon continued from Venice to Washington Boulevards in 1926 and 1927, but a portion within this was vacated for the freeway in 1964. 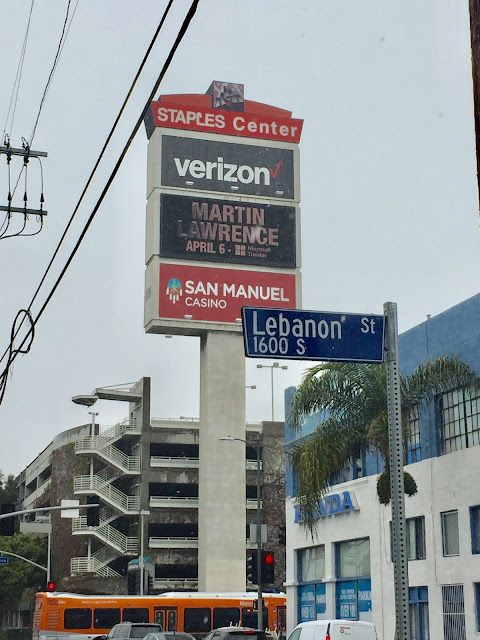 Origins of the Lebanon Street Name
Research did not turn up a solid explanation for the name, Lebanon.  There were not nearby residents found who might have come from Lebanon, Syria or Turkey.  Reasons for the name may include:  attribution to other places named Lebanon in the United States or a Middle East Arab region; biblical reference; or for cedar trees.

Lebanon and Syria in the mid-19th century were provinces of Greater Syria within the Ottoman Empire.  According to historian Sarah Gualtieri, Syrians were the first Arabs to settle in the United States particularly before World War II.

The first wave of migration of Lebanese to the U.S. occurred between 1880 and 1914 prompted by factors like group conflicts and instability.  One episode in the turmoil was a massacre of thousands of Christians in Damascus in 1860.

Individual Syrian immigrants settled in L.A. before this alley became named Lebanon Street, and they introduced their cultural wares to Americans in order to make a living (Oriental goods and rugs).  Historian Gualtieri cited several prominent men who resided in Los Angeles.  The following was found in the 1910 census:

John J. Safady:  age 65, from Turkey, immigrated in 1893, occupation:  curio store owner
(The newspaper printed John Safady's obituary on January 5, 1931 recognizing his years as a merchant in the city.  He had a store at 7th near Hill for 24 years.)

Also mentioned by historian Gualtieri was Nicholas Baida, whose information was found in the 1900 census:

Background information on Baida is more plentiful than for most of the other individuals.  Baida was born in Beirut.  In 1902 he opened an Oriental Art store at Ocean Park's promenade.  In 1907 he built a Moorish house (2103 Third Street, Santa Monica, no longer exists) called the Baron's castle.  When Ocean Park's pier caught fire and destroyed his art store in 1912, he sold the house to recoup his expenses. 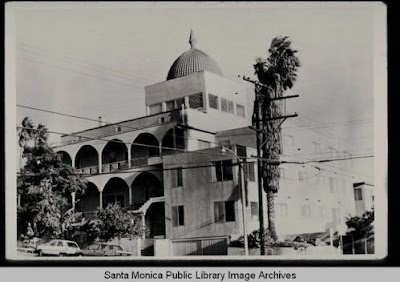