The Pellissiers: Wiltern Theater, Dairy Farming, and Hazel the Cow 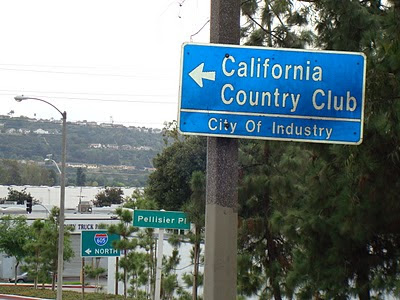 The name Pellissier is often associated with a building in Los Angeles on Wilshire Boulevard, but across town in the San Gabriel Valley, the name was a giant in the dairy industry.  The growth of Southern California in the middle of the 20th century resulted in cuts and and slices into a broad sweep of private land of a single landholder through eminent domain and an assertive neighboring municipality.  A multitude of land uses resulting from the decades of acquisition include:  flood control, freeway infrastructure, the construction of a college, subdivisions, the burial of refuse, the burial of loved ones and municipal expansion.

The Pellissier Building (built between 1929 and 1931) was one of the early structures targeted for preservation by the Los Angeles Conservancy, a grassroots preservation group founded in 1978.  The building and the Wiltern Theater at its ground level underwent renovation, and the efforts culminated with a gala re-opening in May of 1985.

The surrounding area was known as Pellissier Square, stemming from land acquired by Germain Pellissier, an immigrant who arrived in 1867 from a town in the High Alps in southern France.  (It was his grandson, Henry de Roulet, who later commissioned the building.)  Germain amassed a lot of property, including barren land outside of the city, which later became a part of the Wilshire Miracle Mile.  He herded sheep there.

Other relatives followed Germain's path, including a nephew, Francois Fidele Pellissier, who arrived in 1888 when he was about 15 years old.  Francois (or Frank) began dairy farming, and may have done so near his uncle's ranch, along with another young cousin, Anton.  An article from 1896 reported that he was one of the proprietors of Highland Union Dairy.

By the late 1890s, Frank bought land from his friend Elias "Lucky" Baldwin and moved with his new bride to an area east of Whittier Narrows.  A house was built in the year 1905 at 3710 Workman Mill Road.  Frank had an amiable relationship with "Lucky" Baldwin, and he later purchased additional land from Baldwin's daughters.

Frank operated a business called the Alpine Dairy.  He delivered milk in Los Angeles, while his life took root in Whittier.  He raised four sons, Frank, Jr., Leon Albert, Laurence Raymond, and Robert Edmund.  (The senior Frank also acquired acreage in Chino for his dairy cow herds until about the 1940s.)

Los Angeles, the Center of the French Community

There were many French among Los Angeles' early settlers.  A substantial French community was taking shape by the time Frank arrived, and although he moved to the "country," Frank remained involved in the city, serving as President of the French Colony of LA and providing sponsorship for the French Hospital.  His marriage to Marie Valla in 1895 even took place in Los Angeles at the Old Plaza Church.  His wife, a year older than he, was a native-born French-American and also a founder of the French Ladies of Charity of Los Angeles.

Frank, Jr., the eldest son, was born on the Whittier dairy farm about 1896.  He attended the University of California and studied dairying.  By the 1920s, the family ranch was frequently written up in the paper for their award-winning cows in annual competitions.  The paper also wrote about college-educated Frank, Jr.'s modern dairy practices.  By 1925, over 1,100 acres of the ranch land were described to contain 250 acres of alfalfa, 150 acres of corn, 200 acres of hills pasture and 500 acres of river bottom pastures.  The paper reported in 1926 that there were 515 milking cows on their premises.  Frank, Jr., by this time, served as chairman of the county farm bureau.  By around 1928, Frank, Jr. started the Pellissier Dairy as a retail business, after breaking its ties with the Los Angeles Creamery.

The entire property eventually expanded to 3,200 acres of the Puente Hills, with reaches up to Valley Boulevard in El Monte, and 2,800 heads of cattle populated the land.  Around 1940, construction of the Whittier Narrows Dam caused the loss of some of the Pellissier property.

Ranch activities included the sale of Holstein cows, enhanced by the Pellissiers' reputation for quality, award-winning cattle.  Frequently, such as in the spring of 1951, photo opps of their cows were often accompanied by a pretty girl, a dairy queen.  By the fall, one of Frank Pellissier's cows, Pansco Hazel, a Holstein-Friesian cow, was in the news for recognition as a national champion in milk-producing.  News escalated in August, 1952, that Hazel, now 17 years old (or 98 in cow years), was about to set an all-time national record for milk production to surpass 267,304 lbs, a record that was previously set in 1935!  The article also mentioned that Hazel had 13 calves with more than 200 descendents on the Pellissier ranch!  Sadly, Pansco Hazel Excellent died on September 25th, 1953, living only another year following her retirement.

In 1957 Frank became Vice President of the American Dairy Association of Los Angeles.  Successful and prominent as the family was, they also gave back to the community, even in Los Angeles.  At the 1956 Blessing of the Animals at the plaza Church of Our Lady Queen of the Angels (this is the same church where his parents married), the procession was led by a Pellissier satin-black Holstein cow blanketed with white gardenias.

What began as an excursion among a small group of horse riders in 1954 turned into the Pellissier Hills Trail Ride that lasted at least 14 years into 1968.  It became a yearly tradition sponsored by a local chapter of the Equestrian Trails, Inc., a "3-hour excursion through gentle, rolling hills of the dairy begins with a chuck wagon breakfast near the south entrance to the Pellissier farm.  A western barbecue at the conclusion, interspersed with equestrian games, Indian dancing and a gun-drawing competition.  Each year allows for a safe tour of some of the valley's most viewable countryside."

In 1955, the Pellissiers donated thousands of pounds of ice to create a Snow Frolic at two Pico Rivera parks.  It became a Christmas tradition going on five years as reported in the paper in 1960.

Three of the brothers, as well as Leon's three sons, formed a Pellissier contingency as members in the Rotary Club of Whittier in 1964.

In the summer of 1957, eleven square miles of neighboring land wins city incorporation.  As the name suggests, industrial activity was the jist of cityhood, with the number of actual residents in the City of Industry left to a legal minimum of only 600 persons.  From this time forward, the city's encroaching interests reached its rancher neighbor.  Road work proposed in 1958, did not sit well with Pellissier Dairy, as they were not interested in selling their land, according to a news article.

Nevertheless, the Pellissier men, being astute businessmen, utilized their land in a profitable fashion.  They leased property at 1507 Workman Mill Road to the El Dorado Country Club, which its main building may have been constructed in 1955.  The club was seized by the feds for tax penalties.  The Pellissier brothers probably took over the business and established it under the new name, the California Country Club.  Sometime later (I have not been able to pinpoint the year), the land where the Country Club is situated was annexed to the City of Industry, even though references like Google Maps still show the Club's address as in Whittier.  The club is still in existence.

The conversion of Southland farms into subdivisions was prevalent, and the Pellissiers were not an exception.  The Pellissiers, like Whittier's Murphy Ranch and the Leffingwell Ranch, enabled home construction in the mid 1950s, particularly along the San Jose Creek, where their livestock used to run along.  The 1948-era homes in the Pellissier Village Equestrian District was probably one of their earliest subdivisions (housing was in high demand for veterans of World War II.)

Land leasing for non-residential purposes included a dump site, as reported in the paper in September, 1958.

The patriarch, Frank Fidele Pellissier, Sr. died in 1961.  He had survived his wife Marie by seven years.  Meanwhile, the City of Industry's business interests were looming.  The paper reported in 1962 that 100 acres of Pellissier land between Workman Mill Road and the Union Pacific Railway was being considered for annexation.  Frank, Jr. sounded amicable in the news article, stating "We will probably relocate the dairy as the need for industrial property increases."

Dairy land also sat in the way of the San Gabriel River Freeway, completed through this area in 1964, and the Pomona Freeway ran by here beginning in 1967.  (An older street, Pellissier Road, still exists just south of the Pomona Freeway in the Pellissier Village Equestrian District neighborhood.) 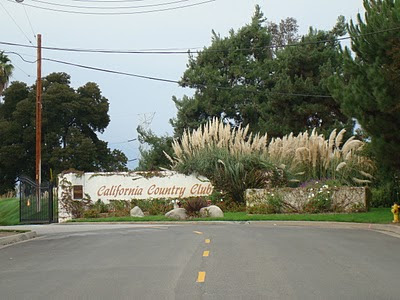 By the end of 1963, the Pellissier Dairy Corp. sold 115 acres for land to be developed as part of Rio Hondo College.  Furthermore, Frank Jr. sold an additional 2.8 acres that included his home and a road.  The other older house, built in 1905 by his father at 3710 Workman Mill Road, was likely to have been situated where today's college softball and baseball fields are located.  It was at this location that the dairy ranch maintained at least six round grain silos.

Unfortunately the entire sale may have involved coercion:  "The sale halts condemnation proceedings which the school district initiated to acquire the site," the Los Angeles Times reported.  Today, the memory of Marie Pellissier is sustained by the Marie Pellissier college scholarship awarded to Rio Hondo students. 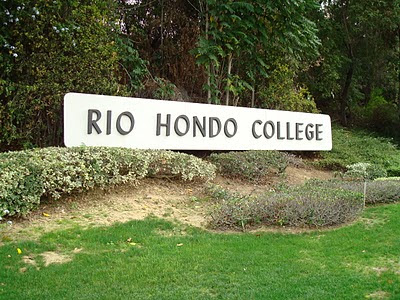 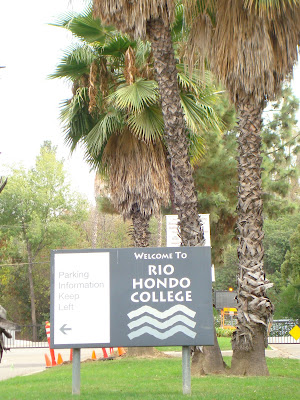 Frank, Jr. passed away in October, 1969.  In addition to all his accomplishments, his obituary mentioned that he was chairman of the Bank of Pico Rivera.

His death and the cost of rising property taxes prompted the surviving brothers, Laurence, Leon and Robert, to sell off the remaining land.  A chunk of the property was sold to the Sanitation District of the county in 1970, and the Puente Hills Landfill was formed.  The dairy business closed in the summer of 1971. 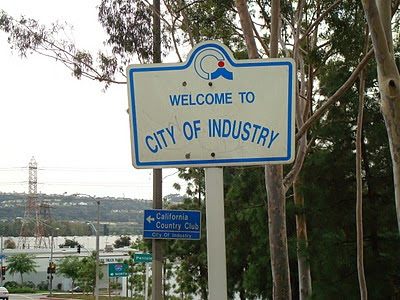