Video Showcase on "The Streets of Los Angeles: a Brief Look at the People Behind the Street Names"

Los Angeles did not just happen.  It was built by real people - and they were as diverse as today's populace.

Combining a blend of historic photographs from the Seaver Center for Western History Research along with contemporary images, the following video is an homage to our everyday street names in Los Angeles and the people behind them.

There are many poignant stories about those pictured in the video, more than the short video can express - among images of families, couples, and single men in the once dusty, remote city.  Further below is a description guide to the people portraits in the video.

Music credit to the song "Time and Space," goes to Darryl Holter, singer, songwriter, and historian.


Apologies that the video resolution is poor on the big screen!  BlogSpot can only handle a small video file.

A Guide to the People Portraits From the Video 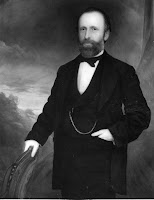 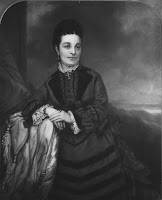 John Gately Downey, an Irishman, was California governor during the Civil War.  There was once but no longer, Downey Avenue, in the city.  Today there is Downey Road in East Los Angeles, and there is the city of Downey named after him.  His wife Maria Jesus Guirado was a Californio.  She died tragically in a train crash in the Tehachapi Mountains in 1883 after married for 31 years. 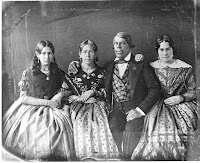 Pio de Jesus Pico is today remembered as the last governor of Alta California, during the time when the region was a part of Mexico.  His country estate, El Ranchito, was located in present day Whittier, not far from much of the properties owned by John Downey.  Pictured are his wife, Maria Ignacia Alvarado along with her niece by her side, Maria Anita Alvarado.  Next to Pico is his niece (his sister's daughter) Trinidad Ortega, for whom Spring Street was named.  Here is an earlier post about Pico and also the mothers of Pico. 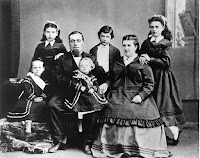 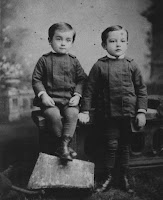 Ferdinand Vignes and his family, shown about 1890.  Ferdinand was a nephew to Jean-Louis Vignes, the pioneering French settler.  Ferdinand's uncle was one of the earliest and most prolific in California viticulture.  The Vignes property included Vignes Street, named in 1874.  The second photo above is dated about 1870 of Louis and Ferdinand Vignes.

Horace Bell was probably as gruff in manner as was his appearance in the above photo, but he tussled with the city streets committee to retain his dear wife's complete street name "Georgia Bell," and to prevent it from being changed to Nevada Street.  Today Georgia Street remains in the lively L.A. Live area in Downtown.  Read more in the L.A. Convention Center blog post.

Prudent Beaudry, originally from Quebec, Canada, served as mayor of Los Angeles from 1874 to 1876.  He is best known for developing the once residential Bunker Hill.  Streets associated with him and his brother Victor, include Beaudry, Bellevue, Victor, and Mignonette.  More about Prudent Beaudry at an earlier post. 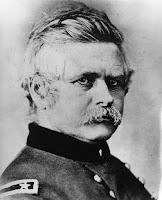 New Mexican Julian Chavez settled in the hills later known as Quarry Hills and Elysian Hills.  Chavez was a member of the newly formed L.A. County Board of Supervisors in 1852.

Jose Dolores Sepulveda and his wife Louisa with daughter, were among a whole bunch of Sepulveda's active in the region, prompting the naming of Sepulveda Boulevard.  More on Jose and Louisa having lived on Date Street - a part of the Macy Street neighborhood blog post. 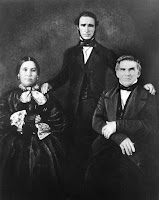 Shown above are Rafaela Cota de Temple, Gregorio Ajuria, and John (Juan) Temple.  John Temple was a very early foreigner from Massachusetts to settle in Mexican Los Angeles.  Temple Street came up for a street name change five times between 1921 and 1953.

Juan Resurrecion Ramirez (1839-1922) was a third generation Californian.  Ramirez Street was the subject of an earlier blog post. 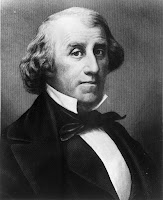 Third-generation Californian Arcadia Bandini de Stearns de Baker married Abel Stearns (she was 14, he was 43), and the couple hosted many parties at their home, El Palacio.  Arcadia Street runs near their former place of residence.  Following Abel's death, she remarried to Robert Baker.  With Baker she co-founded the city of Santa Monica.  Abel Stearns was a highly successful cattle baron.  He also held title to Rancho Los Alamitos, which is why there is Stearns Street in nearby Long Beach. 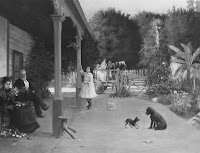 Bearded Antonio Franco Coronel was married to Mariana Coronel, although the lady seated by him does not resemble her.  The power couple hosted writer Helen Hunt Jackson in her travels to southern California which led Jackson to complete her novel Ramona.  Coronel was city mayor, state treasurer and a forward-thinking individual.  Much of the papers, photographs and material artifacts collected by the Coronels are today housed in the Natural History Museum of Los Angeles County.  Coronel Street, located at the base of Elysian Park, was named in 1887, while the yard pictured above may have been his home at 8th and Alameda.  Read more here. 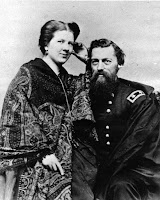 This endearing portrait of Mrs. Stoneman (Mary Oliver Hardisty from Baltimore) and Governor George Stoneman was taken about the time of their marriage.  He had served in the Mexican War and the Civil War and was a California governor from 1883 to 1887.  Stoneman Avenue in Alhambra is named for him. 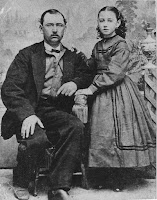 At first glance one might guess the photo above to be of a father and child.  The man was Romulo Pico, son of Andres Pico (and nephew to Pio Pico).  The girl was Catalina (or Catarina), a ward of Andres Pico, and later was married to Romulo. 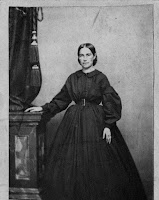 Trinidad Ortega, mentioned earlier above in the Pio Pico family portrait, appears in this later full-length photograph.  She was the "primavera" for which Spring Street was named. 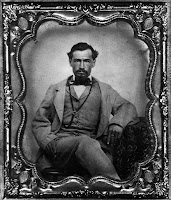 Ygnacio Del Valle was a member of the family that operated Rancho San Francisco that straddled today's Los Angeles and Ventura counties.  Unclear whether he was a son of the patriarch with the same name.  Another family member, Reginaldo, is better remembered for being one of the founders of UCLA.

Actress Mabel Normand at the site of the very early Biograph motion picture studio at Pico and Georgia Streets near today's L.A. Live.

Mr. and Mrs. William Marcus Moore of Pasadena.  He was a tailor, and she worked as a nurse.

Mrs. Soo Hoo Mon Sing, pictured above in a Christmastime portrait, 1908.  She was an affluent Chinese woman in early Los Angeles, with a complete family.  She was profiled in this blog post. 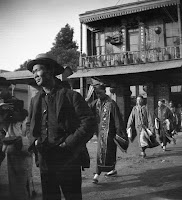 The unidentified Chinese man in the foreground, donning a western-style boaters hat, had a weary, forlorn expression.  He quite possibly had a wife and family back in China. 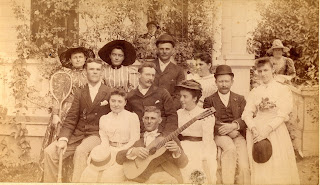 Members of the Dominguez family with friends.
Posted by Elisabeth L. Uyeda at 5:50 PM