Southern California Days of Lemons, Roses and a Shopping Mall

Plenty of street names abound that signify the agricultural landscape of the distant past, such as Walnut Grove, Citrus, & Orange Grove Avenues.

One such street in Whittier is a plain pronouncement to a layer of history beneath the suburban 1950s homes. 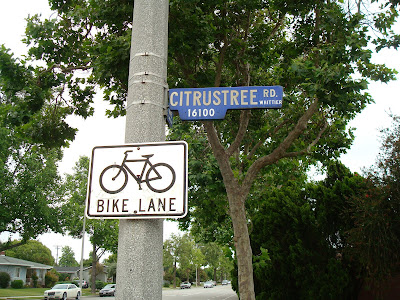 The C.W. Leffingwell Ranch operated here by the turn of the last century until the area was overtaken with new tract homes beginning in 1951.  Dr. Charles Wesley Leffingwell (a descendant of a 1636 Connecticut English settler) was an Episcopal clergyman from Knoxville, Illinois.  He had settled in Southern California around 1893, when he was officiating at St. John's on Adams Street in L.A.  He owned farm land that only successfully produced once his college-educated son, Charles Warring Leffingwell (known as Charles W. Leffingwell, Jr.) began to run the orchards.  By 1905, with 34-year old Charles, Jr. at the helm, the ranch was well-known for lemons, and he was a member of the state's "Lemon Men's Club."  In 1906, Charles, Jr. purchased 300 acres to expand the ranch, but in 1909 he sold 264 acres to an oil exploration firm.  In addition to the lemon crop, another main output of theirs was the walnut.  In the hey days of 1916, the well-known ranch comprised of 500 acres.
The Leffingwells in Pasadena Society

Charles, Jr. lived on or near the ranch in the early years, (his bride, too, after their marriage in 1899.)  By 1910 both father and son had nice homes in respectable Pasadena.  The senior Leffingwell's wife, Elizabeth, was active in clubs including the Civic League.

Charles, Jr.'s father-in-law was Dr. Francis F. Rowland, one of the founders of the venerable Valley Hunt Club and also co-founder of the Pasadena Tournament of Roses.  Rowland served as Grand Marshal for the first several years beginning in 1890.

Leffingwell Ranch Placed on the Market

By 1919, 370 acres of the ranch were sold off to enable subdivisions made up of small farms.  The Leffingwell operation was sold to its employees.  The family name remained prominent in the citrus industry for another three decades; their namesake also secured historical record by way of a prominent road serving as a southern boundary for today's city of Whittier.

Japanese farm hands contributed to the work force around 1910.  Mexican and white employees were also hired, but each group had segregated living quarters.  The Leffingwells constructed an office and bunkhouse designed by the prestigious Pasadena architectural firm, Greene & Greene.

Old-timers recalled in a La Habra history book that the ranch was bordered with roses.  The grounds by the 1930s were abundantly rich in colorful, exotic aloes and eucalypti.

The ranch took advantage of the Bracero Program, an international agreement enabling the import of temporary Mexican labor through the Farm Security Administration, and in the winter of 1943 a newspaper reported 50 workers arrived at Leffingwell and another group sent to nearby Murphy Ranch's orange groves.

A younger sibling of the Leffingwell clan was Ernest de Koven Leffingwell, a well-known explorer of the Alaskan arctic coastline, contributing the first cartographic record as well as identifying the oil potentials.  He earned his own namesake at Alaska's Leffingwell Camp site.  He retired to Whittier in 1917.

Leffingwell Ranch succumbed to the housing boom as the first phase of 3-bedroom 2-bath ranch-style and contemporary-style homes were produced by the prolific Lusk Company by 1951.  In fact, Lusk set up their headquarters on the former ranch and did not vacate to its Irvine offices until 1970.  Their first commercial development was Whittwood shopping center (which also stood on former ranch land) and opened in 1951.  The same year, the first phase of homes were sold in a tract to the west of the mall, between Cole Road and Scott Avenue.

Lusk continued to roll out more and more phases, enticing housing-hungry families and war veterans with the mild climates, roofed outdoor patios, and electronic conveniences of garbage disposal, dishwasher, clothes dryer, an air conditioning system, and lots of closets.  In 1953, homes priced from $13,950 to $14,525 were offered at Citrustree Road, which is situated east of the mall.  Another sales draw touted that the "tract set back from the boulevard for suburban seclusion." 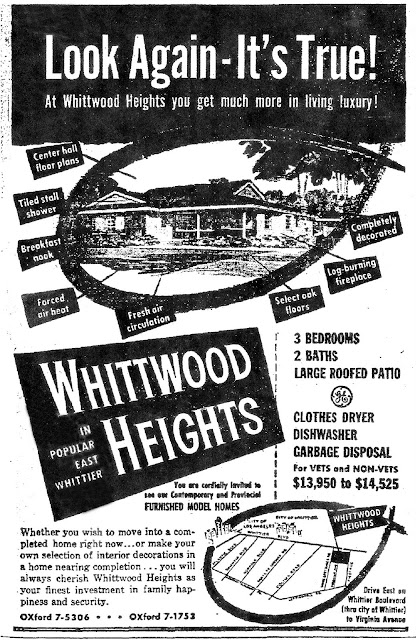 The late 1950s was a theater of city-hood struggles throughout Southern California as differing groups sought to incorporate their towns while opposing forces reacted to halt annexations.  By 1958, the Whittwood Center and surrounding homes made up a considerable tax base.  Also the nearby new community of Friendly Hills was in the same predicament.  Groups sought to prevent the city of Whittier from annexing the new developments; they petitioned to form their own new cities, with proposals like Diamond Hills, La Mirada Hills, and Whittier Hills.  The drama was ongoing into 1961, with another new town proposed:  La Colima.

The Shopping Mall Will Feed the Spacious New Closets

In 1960 the Broadway Department Store broke ground at Whittwood Center.  By 1970, an existing tenant, J.C. Penney, would expand onto a new site on the property.  In 2004, the antiquated enclosed mall was re-designed to the open air concept that prevails today, with its big boxes PetsSmart, Target, and Cost Plus World Market, as well as its long-time tenants J.C. Penney and Von's Market.
Posted by Elisabeth L. Uyeda at 6:18 PM