The car jostles along the rough and worn right lane on the northbound 605 freeway nearing the exit at Rose Hills Road in Whittier.  The roadside offers the driver views of earth-moving equipment businesses, such as Quinn.

Other than the distant sign R-O-S-E  H-I-L-L-S at the western face of the Puente Hills, there is nothing beckoning a detour to an idyllic spot with a water feature, or a Shangri-La getaway.  In 1926 there were two such places.


The main thoroughfare Workman Mill Road takes one to the main gate of Rose Hills Memorial Park.  Opposite is Shallowbrook Road leading to blocks of the grayish-white buildings, Gateway Pointe Industrial Park, the 1.6 million square foot complex completed in mid-2006.  Prior to this was an expanse of wild growth from former agricultural fields. 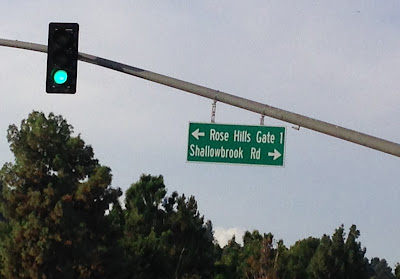 The road name is the only visible reminder of a former ranch.  The next street southward is Mission Mill Road, the location of the two former houses profiled here.

10005 Mission Mill Road was the home of Adela Rogers St. Johns (1894-1988) on a property named Shallow Brook Ranch.  She was a “girl reporter” whose first job was on William Randolph Hearst’s San Francisco Examiner.  She later interviewed celebrities in the budding world of Hollywood movie stars, and she authored several books, including a biography of her father, prominent L.A. criminal lawyer Earl Rogers.  At the age of 82 she reported on the trial of Patricia Hearst.

Though married three times she kept the name of her first husband Ivan St. Johns.  The 1920 census shows they were living in Los Angeles at 2109 Toberman Street.  His occupation was listed as secretary to the mayor, and the couple had two kids, Elaine, not quite 2 years old and Ivan, Jr., about 2 months old.  The Los Angeles Herald reported in the spring of 1921 that Ivan, Mayor Meredith Snyder’s secretary, would take a new assignment to direct Snyder’s re-election campaign.  The mayor did not get elected for a fourth term, and Ivan was out of a job.


A November, 1926 issue of the Los Angeles Times boasted a new home of the “old English type” built for $35,000, in the Whittier district but outside the city limits.  Also mentioned - the house was surrounded by a 15-acre walnut grove.  The west side of the property almost reached San Gabriel Parkway where the 605 runs today.


﻿
In very close proximity across the Parkway (but polar opposites socio-economically) stood a neighborhood with four streets consisting of modest, small houses and walnut operation-related structures:  Chancellor and Spring Grove Avenues, and Kratt and Shadow Lanes.  Those homes cleared out about the year 1950 through eminent domain for the Whittier Narrows dam project; the Army Corps of Engineers drew the line at the Parkway sparing the lovely mansions on Mission Mill Road.


Adela’s 13-year marriage went south as the Times reported her divorce finalized in the spring of 1928, citing extreme cruelty on the husband’s fault.  The week after the divorce she married Richard Hyland, a former Stanford football star three years her junior.  They settled into the Whittier house.  Adela’s second marriage fizzled after six years and a custody battle for their son.


The location of the house was not far-fetched.  Ivan St. Johns was a local boy.  His parents settled in the city of Whittier in the late 1890s, by way of Iowa and Pomona.  Clara and Samuel St. Johns were not farmers.  Clara was New York-born and educated.  Samuel soon took ownership of the Whittier Hotel, which prior to 1896 was called Hotel Lindley, located at Bright and Philadelphia Avenues.  Clara ran a millinery shop, and the family home was in today’s Uptown Whittier district.  Daughters Mabel and Pearl attended Stanford University and USC respectively.  Clara survived both her husband’s death in 1908 and son Ivan’s premature death in 1935 brought on by a heart attack while living in Hollywood with his second wife and making a living as editor of Photoplay, a fan magazine.


For three additional photographs of the St. Johns home, go to the Whittier Public Library Digital Archives.
In the years following Adela’s second divorce and the death of her first husband, Shallow Brook Ranch appears in the local Whittier News as an egg and turkey farm belonging to Robert M. Alexander (a California native in his 40s).  Brief mentions advertised fresh turkeys for Thanksgiving and turkey shoot fundraisers appearing from 1935 through 1938.  The earlier mention in 1935 stated the turkeys raised at Shallow Brook went to the turkey shoot held at the neighboring Pellissier Ranch.  Shallow Brook was a regular community gathering place for hayrides and box suppers; Masonic lodge meetings; the Whittier Twenty-Thirty Club; a fashion show and bridge party by the Junior Women’s Club; and Boy Scout troop campouts at the cabin “along the banks of the Puente Creek”.  The adults enjoyed the tennis courts and spacious lawns surrounding the home.  Newspaper mentions are found for as late as 1941 after the reported 1939 handing over of business operations to Alexander’s employee, John Moore.


The tremendous rain and floods in March of 1938 throughout Los Angeles County caused the “swollen San Jose creek,” and the newspaper reported 20 eucalyptuses on the Alexander property swept down the creek to the San Gabriel River.  Perhaps a calmer creek from ten years earlier inspired the name Shallow Brook.


A California publication, The Grizzly Bear, ran an article October 1948 reporting the 500 members of the Native Sons of California and their guests who convened at Alexander’s Shallow Brook Ranch to hear Congressman Richard M. Nixon discuss the House Un-American Activities Committee, which Nixon was a member.  Master of Ceremonies was Edward J. Guirado, another local citizen.  It must have been a fond return to Shallow Brook Ranch for Nixon – Adela’s obituary stated that Nixon was a newspaper delivery boy whose route included her house.  In 1970 when Nixon was President of the U.S., he awarded a Presidential Medal of Freedom to eight journalists, including Adela.  President Nixon remarked that she had been a long-time friend of him, his wife and their families.


The house at 10005 Mission Road was demolished in 1981 to make way for the new headquarters of Oltmans Construction Company.  The last owner seemed to be Alexander’s wife, Audrey, who by then was about 65 years old.  In 1985 Oltmans moved into the modern two-story office building along with a service facility totaling over 55,000 square feet. 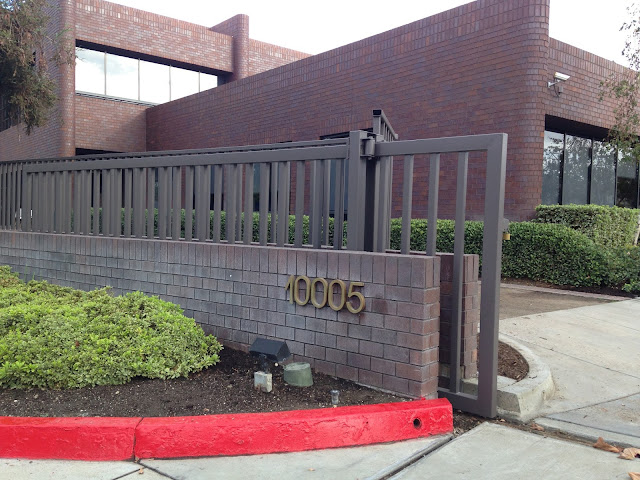 On a visit the morning of October 19th this writer saw a concrete channel across the street from the Oltmans office building.  It is a portion of the storm drain system to control a tributary of the San Gabriel River.  The Whittier Narrows Dam was completed in 1957 to capture the water flow of the San Gabriel River and the Rio Hondo.  Beyond, cars moving on the 605 freeway can be seen yet the traffic noise does not seem to reach this spot. 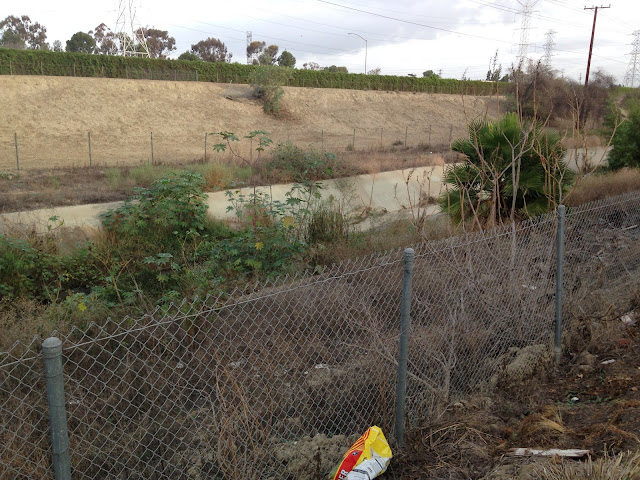 
Incidentally one of Oltmans’ recent clients was a neighboring firm, the Quinn Company.  Oltmans was also the construction firm for the Gateway Pointe complex a decade ago.


The Neighbor at 10004 Mission Mill Road


﻿﻿
Film director Frank Lloyd (1886-1960) built a mansion (architect, Lucius A. Phillips) the same year of 1926 across from the St. Johns property.  He and his wife Alma along with their 5-year old daughter Alma Catherine can be found in the 1920 census.


The Lloyds were early trendsetters among the “film colony” to invest in ranch properties in the prosperous years before the Great Depression, keeping up with the likes of silent film cowboy star William S. Hart’s Horseshoe Ranch in Newhall and actor Noah Beery’s Paradise Trout Ranch in the San Fernando Valley.  Frank was successfully making silent films; this home was built one year before the first full-length talkie The Jazz Singer.  Frank’s career was punctuated by two Academy Awards for Best Directing.


The St. Johns/Hyland family and the Lloyds were neighbors who shared common backgrounds in the entertainment industry.  Were the Lloyds swayed by the street names at their crossroads – San Gabriel Parkway and Mission Mill – the latter name a colorful conjoining of two words evoking the romantic California past?  Were the families aware that the original site of Mission San Gabriel was a mile and a half away?
Or were they influenced by the other “film colony” that had moved prominently into nearby El Monte a year earlier – Gay’s Lion Farm produced at least three movie star lions.  By the twenties, Palm Springs was a popular destination for Hollywood actors – did their road trips east along the highway Garvey Avenue allow a chance to discover this part of the Whittier outskirts?


In the spring of 1936, the tranquil creek nearby provided a nice attraction for daughter Alma to host an all-day outdoor party at the walnut ranch which the newspaper referred to as “The Grove”.  Guests were asked to dress casually so they could fish for crawfish and not worry about tipping over in the stream or running through the meadows.
The storm of ’38 may have prompted the Lloyds to head back west.  The Los Angeles Times reported in the summer of 1939 that they were settling in their new ranch in the Topanga Canyon.

During this time the area’s English walnut production was shrinking.  Partly stemming from disease, the 1920s walnut production began a gradual shift from southern to northern California where the growing environment was better.  This was followed by a drastic decline in southern California walnut farming that by 1958 southern California’s walnut industry only comprised 15.2 percent.  To underscore the extremity in 1919 fields south of Tehachapi had 75.4 percent of the state’s walnut growth.  This may explain why on a horse farm shows up on a 1951 County Regional Planning map for 10004 Mission Mill Road.

At some point the house became the home of Dr. Walter S. Green.  His property was the location of two barbecue ranch-style fundraisers for Assemblyman Dave Stirling, once in 1977 and again in 1979.

Unknown is who razed this house – could it have been Oltmans?  They also owned the property at 10050 Mission Mill Road that received a contract to warehouse the first California lottery tickets in 1985.
﻿﻿﻿﻿ 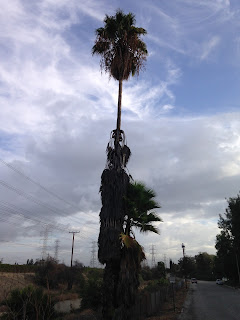